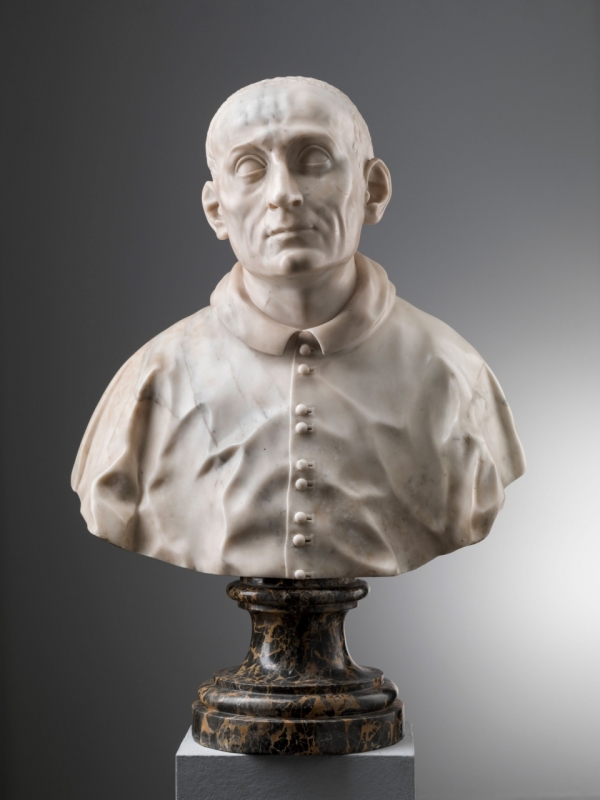 The present marble bust relates directly to a small fragmentary terracotta modello (below left) that was recently found bricked up in a chimney, in the house in which the sculptor and restorer Antonio Fontana (Rome 1641-1700) had lived. This terracotta modello, now in the Museo di Roma, was identified by Elena Bianca di Gioia in 1986 with the previously lost “bustino di S. Carlo di creta cotta”, described in the inventory made of Ercole Ferrata’s great collection of modelli immediately after his death. The two busts which correspond particularly closely in form, truncation and in the modelling of the creases and folds of the drapery, indicate that the terracotta modello evidently served as Ferrata’s model for the present life-size marble bust. Such striking similarities confirm that this marble bust was the culmination of a creative process that had began with Ferrata’s modelling of the small terracotta modello now in the Museo di Roma.

The discovery of the present marble bust bears out Bianca di Gioia’s identification that the terracotta served as a “‘modello in piccolo’ per un busto di cardinale o prelato”, the idea for which was inspired by Alessandro Algardi’s

lost reliquary bust of San Carlo Borromeo. A small, silvered bronze bust of San Carlo Borromeo formerly attributed to Algardi (1595-1654), with whom Ferrata worked shortly after his arrival in Rome in 1647, has also been associated with the terracotta modello by di Gioia. In the silvered bronze, the drapery is treated more schematically than in the terracotta modello or the marble, and the head is carried at a slightly different angle, yet they clearly reflect a common archetype. Jennifer Montagu does not accept the attribution of the silvered bronze to Algardi, which di Gioia has suggested may be the work of a less distinguished member of Algardi’s or Ferrata’s studio. Nonetheless, the small silvered bronze bust may relate to a lost San Carlo Borromeo from a series of reliquary busts that Algardi is known to have made for the church of the Madonna di Galliera in Bologna.

As a collaborator of Algardi, it is not surprising that Ferrata adapted his master’s model for the present life-size marble bust of the terracotta modello in the Museo di Roma. A similar instance occurred in 1658 when Francesco Barberini commissioned Ferrata to provide the model a replica of Algardi’s marble, The Encounter of St Leo the Great and Attila (Vatican, St Peter’s, commissioned 1646). Baldinucci stated that “Un bellissimo modello, in piccola proporzione, di terra, aveva fatto il Ferrata dalla maravigliosa tavola dell’Attila di San Pietro”; both the terracotta and the mould remained in Ferrata’s studio, and were included in his posthumous inventory of 1686. The relief model, which was executed in silver, was given by Barberini to Philip IV of Spain in 1659.

Carlo Borromeo (1538-1584) was the son of conte Gilberto II, Borromeo and of Margherite de’ Medici (the sister of Pope Pius IV). Upon the appointment of his uncle as Pope Pius IV in 1560 Borromeo was appointed archbishop of Milan, he also established a learned academy, whose memoirs he published as Noctes Vaticanae. Upon the death of Federigo, his elder brother in 1562, Carlo, despite pleas from his family and Pius IV to leave the Church so as to marry and have children, preferred to continue to serve the Church.
On 18 January 1562 during one of the latter sessions (of twenty-five) of the Council of Trent, Borromeo presented a list of proposals for the reformation of the Church. The Council of Trent, is one of the most important Ecumenical Councils ever convened by the Roman Catholic Church. It defined and condemned Protestant heresies and illuminated Roman Catholic definition of scripture, tradition, original sin, justification, Sacraments, the Eucharist in Holy Mass and the veneration of Saints.
Most importantly Borromeo’s perception that many abuses in the Church were due to the ignorance of clergy, led him to establish seminaries, colleges and communities for the education and preparation of candidates for the priesthood, which greatly benefited the welfare of the Church.
Borromeo was beatified in 1602, and canonized by Pope Paul V on 1 November, 1610. His feast day is November 4.

Biography
Born in 1610 in Pelsotto, near Como, Ercole Ferrata was first apprenticed to Tommaso Orsolino (fl. 1616-1674) in Genoa, and by 1637 he had moved to Naples where his career began to take shape. However, his talent was only fully recognised when he arrived in Rome in 1646 as the protégé of the great architectural patron and administrator, Virgilio Spada. Initially, he worked as the assistant of Algardi, firstly on his great relief, The Encounter of Leo the Great with Atilla (1646-1653) for St Peter’s. In 1647 he became a collaborator of Bernini, producing, for instance, the large stucco figures of Faith, Santa Chiara and Santa Scholastica and a marble Angel for Santa Maria del Popolo (1655-1658), as well as models for a bronze Cristo Vivo and Cristo Morto in St Peter’s (1658-1660).

Upon Algardi’s death in 1654, Ferrata inherited part of his collection of modelli and set up his own studio with Cafà, Foggini, Marcellini and Rusconi. He also taught at the Medicean Accademia Fiorentina. For the altarpiece on the high altar at Santa Nicola da Tolentino (1654-1655), which is after a design by Algardi, Ferrata worked with Domenico Guidi. He contributed to the decoration of Santa Agnese in Agone (St Agnes on the Pyre, 1660), the decoration of Santa Maria in Vallicella and the decoration of the Ponte Sant’Angelo (Angel Carrying the Cross, 1688-1689, after a design by Bernini). He also worked on the figure of Charity on the monument to Clement IX (San Maria Maggiore, 1671) and on the figure of Pope Clement X (St Peter’s, 1682-1686).