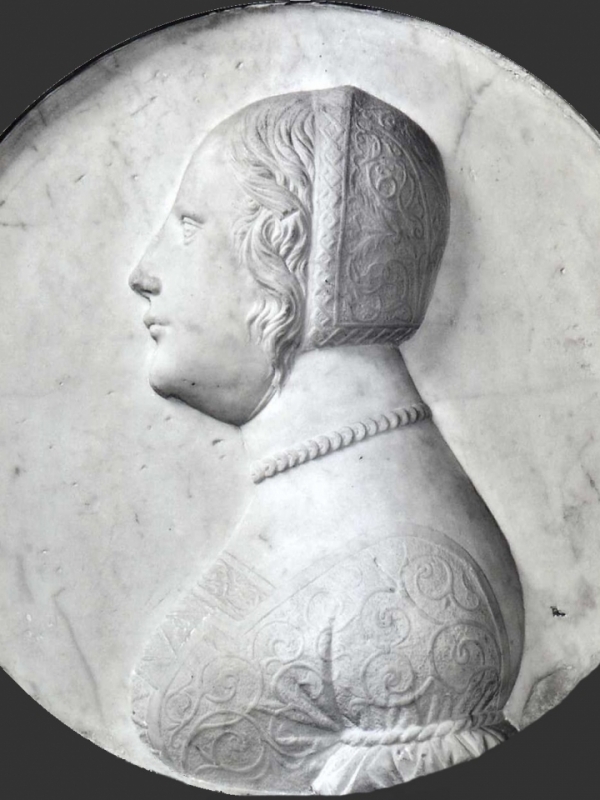 Sculpted a bust in profile facing left, with the clear-breathing monumental figure silhouetted and inscribed with geometric perfection on the bottom shelf of a round plate with a thick veined marble, the effigy of this sophisticated lady probably qualifies as a dynastic portrait , the identity of which we can imagine declared in origin by an inscription dashed gold along the edge.
The sculptor, in fact, within a raised circle in imitation of a coin, delineates with measured physiognomic significance and solemn intonation, facial features, emphasizing the icy gaze absorbed nobility of character, and describes with particular attention to the wealth of princely clothes and ornaments, perhaps once adorned with gold highlights; the bodice that laced in marble pretends velvet embroidered with fine foliate scroll motifs and rosettes reverse spiral of taste 'neoattico', repeated with more performance wrapped in palm leaves and terminations headset profile by a border of lozenges, worn tightly at the throat as if to enhance the liveliness of thick lock of hair twisted beyond flowing along the temples, and the exquisite necklace with diskettes, carved with the rigor and evidence of a marquetry perspective.
Built with a specific intent to appeal to the ancient greek-roman world, this type of portraiture was a genre very popular and widespread in the Italian courts where the interest in classicism had become more imitative and archaeological connotations. In species where the Lombard area 'imagines clipeatae' knew an extraordinary revival, already promoted by Filaret, through the marble medallions with portraits of the Caesars, historical, biblical and mythological entered by Giovanni Antonio Amadeo and Mantegazza on the facade of the monastery of Pavia (1473-1499) that were the most important and spectacular assemblage of marble profiles, described in 1480 by the Florentine Giovanni Ridolfi as "antique heads of marble inspired of medals." This decorative fashion was adopted by the Sforza as preferred solution for deploying and dynastic portraits of court within architectures, portals and monuments telling sign of a propensity antique civilizations that developed in Lombardy in the sign of a close dialogue with the ancient world, which the end of the fifteenth century will give a radical change in the classical sense of the sculpture course.