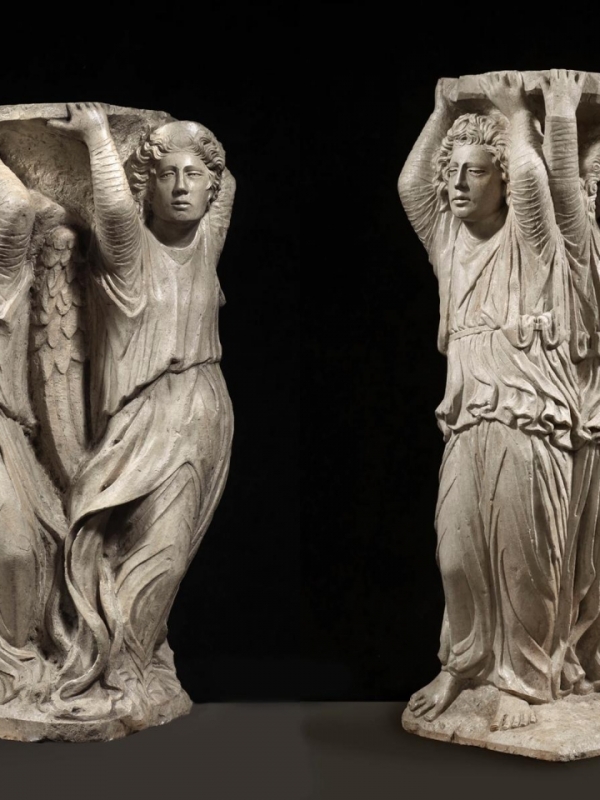 The two pairs of Angels boast a prestigious provenance from the collection of the celebrated architect, ceramicist and designer Georges Hoentschel (Paris, 1855-1915), one of the most prominent and sophisticated collectors on the Parisian art scene between the end of the 19th and beginning of the 20th centuries, famous for his role as designer of the pavilion Union Centrale des Arts Decoratifs at the Exposition Universale of 1900 and for his involvement in the ambitious project for the Exposition Retrospective de l'Art Français des Origines à 1800, held in the Petit Palais in the same year.
A significant photograph of the time documents the two sculptures in 1906 in the "Salle Gothique" (Brennan 2013, p. 152, fig. 5.5), displayed in the exhibition areas established at n. 58 Boulevard Flandrin, in a building adjoining the collector's new residence in the Rue Théry, celebrated at the beginning of the century by the major titles of the international press as one of the most prestigious and influential art collections of the time (The Rise of Applied Art, 22 December 1906; Hoentschel Art for New York, 23 May 1907). (PL. I). Starting in that year, the valuable Hoentschel collection was sold in four significant installments to the American banker and cultivated collector J. Pierpont Morgan, who shortly afterwards donated it to the Metropolitan Museum of Art in New York. In the catalogue of the Parisian collection published in 1908, the two groups were recorded as "North Italian XVI century" (Pératé - Brière 1908, I, p. 9, pl. XVIII), while they arrived in the prestigious American museum as "France, late Renaissance", works by an "unknown sculptor, second half of XVI century" (Breck 1913, p. 164, nn. 173-174).
During the century in which they formed part of the collection of the Metropolitan, the Angels never found an appropriate historical-artistic contextualisation, so much so that on their recent return to the art market (December 2014) they still appeared with a generic reference to an unknown North Italian sculptor working towards the end of the 15th century, being compared to the style of Francesco di Giorgio Martini and with faint echoes of the art of the Lombard Mantegazza family.
A significant contribution was provided by some photos belonging to the Ulrich Middledorf Archive held in the Photo Library of the Kunsthistorisches Institut in Florence; there, the present sculptures are catalogued by the scholar as "nordost italienische" second half of the 15th century and as "veneto 15 secolo" respectively. This reference would appear to be borne out by the fact that the two pairs of telamons are sculpted from blocks of limestone, also known as pietra d'Istria, usually used in architectural decoration and in the production of sculpture in the artistic centres of Dalmatia and in the areas of the Italian pensinsula which, during the Quattrocento, were under the political and cultural influence of the Venetian Republic.
Further confirmation is provided on purely stylistic grounds as the two portentuous sculptures are characterised by the pronounced jutting of their heavy and angular somatic features, the characteristic carving of the eyes which are strongly elongated and with deeply incised pupils, the vigorous pose and the lively diagonal dynamism of the garments, which in one pair are cut by sharp oblique slashes, and in the other, bizarrely rippled by pleated drapery and papery flaps. These elements explicitly recall the results of that fortunate cultural moment that occurred in the middle decades of the Quattrocento on both shores of the Adriatic subjected to the cultural and artistic domination of the Serenissima, manifesting itself especially in the production of the most influential artist working between the Ventian lagoon and the eastern shore of the Adriatic, the sculptor and architect of Dalmatian origin Giorgio di Matteo da Zara, known as Giorgio da Sebenico.
Born in 1409 in Zara and most probably educated in the city of the Doges by the beginning of the 1420s, Giorgio must have completed his artistic education in the most prominent local sculpture workshop led by Giovanni and Bartolomeo Bon, participating, as scholars have often suggested, in the prestigious workshops of the Palazzo dei Dogi, in the sculptural decoration of the Porta della Carta (1438-1443) and the portal of the Scuola di San Marco (Chiappini di Sorio 1979; Schulz 1979, Mariano 2011).
In 1441, as documents attest, he had moved from Venice to Sebenico at the request of the cathedral chapter to work on the construction and sculptural decoration of the church of San Giacomo, a commission which was to earn him in the years that followed some of the most significant projects of the Adriatic and Dalmatian Renaissance. These included the construction of the chapel of San Francesco in Zara (1444), the chapel with the Tomb of San Ranieri in the old church of San Benedetto, later transferred to the parish church in Kaštel Lukšić (1444) and the Tomb of Sant'Anastasio in the cathedral in Spalato (1448), the Sacrophagus of Niccolò and Stefano Draganich in the church of San Francesco (1447) and the famous sacristy within the cathedral of San Giacomo (1450) in Sebenico, while in Ancona - a city where fifty or so years later he would be recorded as "degnissimo maestro tagliapietra" [most worthy master stonemason] (L. Bernabei, Croneche Anconitane, 1492-1497) - he was responsible for executing the Loggia dei Mercanti (1451-1454), the sculptural decoration of the portal of San Francesco alle Scale (1451) and that of Sant'Agostino (1460-66) (D'Elia 1962; Fiksovic 1963; Montani 1967; Puppi 1970; Kokole 1989; Chiappini 1993; Mariano 1993; Stefanac 2005; Mariano 2011, with earlier bibliography).

In conclusion, despite the clear stylistic discrepancies, we can consider the two pairs of monumental Angels to have been executed within the same workshop context that witnessed the involvement of at least three distinct personalities: Giorgio di Matteo, identifiable in greater part in the execution of the first group, aided by one of his trusted assistants employed in the workshop of the cathedral of San Giacomo in Sebenico, and a third involved in the execution of the other pair of angels which, considering the similarities with works datable to a later period, might have been carved several years after the previous one. Considering the fact that both, in all likelihood, must originally have formed part of a single project intended for the realisation of a funerary monument situated within a Dalmatian church, it cannot be excluded that it was begun when Giorgio di Matteo was still alive but completed after 1473 by his close collaborators by then working with a certain autonomy. The two sculptures were conceived to serve structurally as corner pilasters arranged to support a monolithic funerary ark/tomb, as the apposite right-angled hollows visible on the upper side of the two blocks confirm. On the back of the sculptures, both display two different types of workmanship, appearing barely roughed out at the level of the wings, thus excluded from the eye of the observer, while in the lower part, in correspondence with the flow of the garments, they seem to be worked with a greater finish, permitting also a lateral view. The works also seem to have been conceived to be seen principally from below, as suggested by the almost complete working of the lower part of the rear and the inclination of the figures with the torso and the monumental heads projecting more than the rest of the body, thus implying that they were originally placed at the top of a balustrade or on individual plinths. A significant indication might also be provided by the different syntactical articulation of the two pairs, one intended to provide the spectator with a broader and closer view, the other with a more explicitly frontal and close up view, perhaps on the basis of their original positioning on the side wall of a chapel or in the presbytery of an important ecclesiastical building.