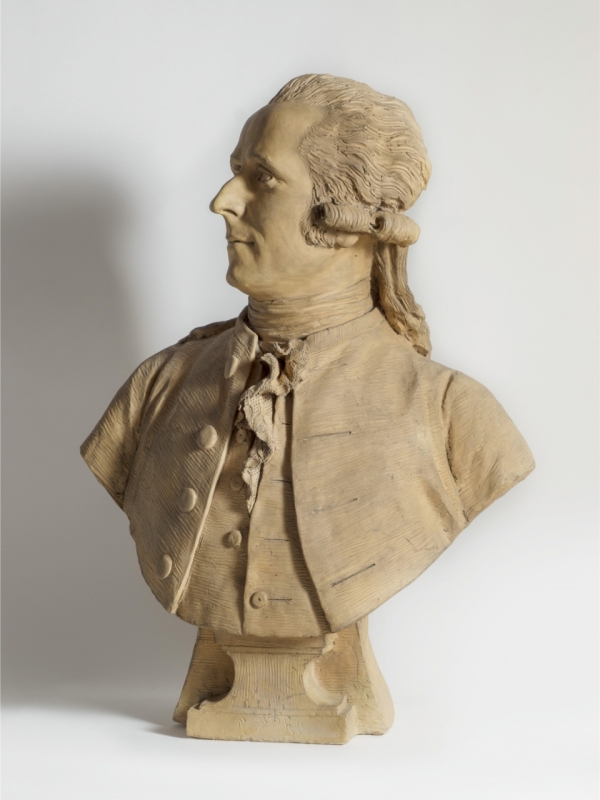 This terracotta portrait bust, executed with naturalistic and introspective sensibility, depicts a middle aged French aristocrat, as we can infer from the sitter attire and hairstyle, that are typical of the last quarter of the XVIII century.
The signature on the back of the base let us ascribe this work of art to the hand of Gaetano Merchi from Brescia. Artistically raised in the late baroque atmosphere of the Venetian area, Merchi, in 1772, was called at the service of Empress Katherine II in Saint Petersburg, from where he moved to Paris where he stayed with his brother, a musician of the Opera theatre. From 1773 to 1777 he frequented the Académie Royale of art where he specialised in portrait sculpture, either in marble, bronze and terracotta. Trough his brother’s relationships he started to carve portraits of actors and ballet dancers, acquiring an immediate notoriety that lead him to more important commissions within the Parisian aristocracy. Testimony of his works are four busts, two in marble and two in terracotta, portraying actress Marie Madeleine Guimard (Paris, Bibliothèque-Musée de l’Opéra; Paris, art market), and the terracotta busts portraying the actors Thierry de Maignet and Pierre-Louis Dubus (Paris art market). His portraiture skills grew through the years, also outside France, and in 1759 he became Court sculptor for Charles IV of Spain for whom he produced many portraits of the members of the Spanish royal family.

Unfortunately we have little information on the early activity of this sculptor, and on the early phases of his artistic formation in Italy. What we can deduce from his Parisian portraits is the influence of masters of the preceding generation of sculptor such as Jean Baptiste Lemoyne.
His art is characterised by a peculiar treatment of the clay, that in his sculptures is of fine quality, by the modulation of the contrast between the skin surfaces – skilfully refined – and other parts, such as the hairdo and garments that “scratched” to create a vibrant chiaroscuro. All of this is a result of the constant updating given by the relationships established with the famous sculptors of the time such as Houdon and Caffieri, also pupils of Lemoyne. To such we add the particular zeal taken in the rendering of the sitters posture, and the attention in the physiognomy details such as the eyes that are rendered with a sharp profile that gives to the sitter an intellectual depth. A depth thatrecalls a knowledge of classical sculpture from antiquity, probably acquired in Merchi’s Italian training.